On July 11th, 2019 I found myself in New York City with about 10,000 other cloud enthusiasts. This was my first big cloud conference with Linux Academy and it was overwhelming, to say the least. As a newcomer, I was armed with the knowledge of my company and our awesome platform, but I didn’t know much about the other vendors throughout the venue—except one. A Cloud Guru was our fiercest competitor and if there was anything I was well aware of, it was their team and offerings. We even shared the same level of sponsorship for the event and so our booths were the exact same size, with similar locations. In every industry, it’s important to understand your rivals. Just as my team knew ACG’s strengths and weaknesses, I’m sure they knew ours.

Linux Academy always approached the differentiation among platforms with respect, and I’m sure ACG did as well. Because when the customer that we love, mentions using multiple tools to reach success, it doesn’t diminish the success itself. Learners would sheepishly approach our booth with ACG swag and say “I love you guys! But I also like ACG.” Our response was always “That’s okay!” Or if a learner mentioned certification we always emphasized the achievement over the method. “That’s awesome! We’re so proud of you!” Of course, we wanted our learners to love our content. But we also recognized that learning is agile and our learners don’t operate in a land of absolutes. Click here for more info AWS Cloud management.

Our learners benefitted from multiple methods, and who were we to discourage them? This entire industry was built on finding unique solutions to complex problems, after all. Changing requirements and changing learner demographics demanded that technology training evolve. We could support changing needs, but did we really need to own the entire effort? After all, “the cloud is big enough for everyone.” I know, because the ACG instructor I ate lunch with during the AWS Summit said so.

That’s right. Before the acquisition was even a whisper in the mind of either company’s founders, I was seated at a lunch table with an ACG instructor. The worst part about that lunch? He was a great guy. He was smart and friendly and held no animosity for me or my teammate sitting beside him. But to understand why this moment was so unique, you have to understand how we got here. So let’s look back at the events that led to this very moment, as well as the greatest cloud duo of all time. 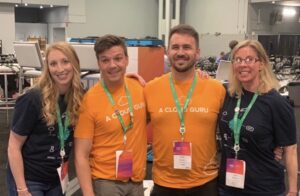 What began as a humble blog in 2011, quickly transformed into a community of learners sharing resources. The company scaled quickly and evolved into the full course platform you see today.

The precursor to the Hands-On Labs our learners have come to know and love so deeply. Live! Labs were the infancy release of this innovative tool.

The first AWS labs went live and became a staple for preparing for exams, but more importantly, preparing for real-world scenarios.

In January of 2015, Sam and Ryan Kroonenburg, brothers from the countryside of Australia, launched the very first version of A Cloud Guru, and it went crazy.

The introduction of mobile app training allowed learners to take their courses on the go, and make the most of their free time.

Mere weeks before re: Invent, 2017, ACG released a subscription option for members, as well as its popular YouTube series.

Another surprise, ready just in time for re: Invent, was the business platform rollout. Now, organizations had their own unique dashboard becoming cloud gurus.

While this might seem unimportant to some, it set the stage for what would happen only five months later. This act of kindness, followed by the sentiment that the cloud is “big enough for everyone” sets the stage for a beautiful relationship to come.

This epic accomplishment made even the team at LA tip their hats. It also made all of us say “Wait, what number are we at?”

On Sunday, December 1st, 2019 ACG and LA simultaneously prepared for AWS re: Invent in Las Vegas, Nevada. Two sets of teams were carefully packing up audio and recording equipment. Event managers from each organization carefully reviewed their assets and schedules for the event. Both teams took flights to hotels that were within a mile of one another. And while sharing the same air at conferences is common for ACG and LA (usually operating booths within a few strides of one another) this year was different. While both teams were on the same side of the conference itself, the actual booths weren’t even within eyesight of one another. This is also why the LA team had no idea that as they were interviewing learners, so was ACG.

A Cloud Guru and Linux Academy announced their alliance; signaling an end to years of competing as cloud training titans. Learners of both platforms rejoiced, cried, danced, tweeted, and picked their jaws up off the floor as the day went on. No, this was not a dream, although some have referred to this epic pairing as such. In the words of Anthony James:

“I’m thrilled for our students. They are the true winners in this combination of two best-in-class cloud training providers. Our student-first missions are completely aligned, and we truly are better together.”

Whether you’re here as an original Linux Academy learner, or you started your coursework with A Cloud Guru, we’re just glad you’re here. When we put our two journeys side-by-side, it’s easy to see that the end goal was always the same. Both organizations wanted, and still want, to promote learning through updated content, awesome instructors, and innovative tools. While both teams were working tirelessly to improve their product, they were actually working toward something much bigger. While Linux Academy focused on optimizing our Hands-On Labs and Cloud Playground, ACG was perfecting eloquent, cutting-edge video content with instructors as witty as they are intelligent. Many learners often compared our offerings, and we understood why. But just because LA is older, doesn’t make it better. And just because ACG is known for its fun, light-hearted, engaging content doesn’t make it better. Apart, neither platform was truly “better”. We were merely chasing one another’s shadows in an infinite game of tag.

It’s reminiscent of the moment when Batman realized he was wrong about Superman in “Batman v Superman: Dawn of Justice”. 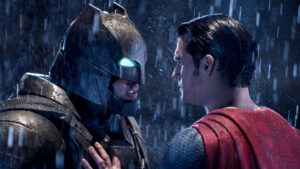 And much like the ACG-LA acquisition, many die-hard fans were left in a state of shock after this moment. When Batman finds out that Superman’s mother shares the same name as his own mother, he realizes they aren’t as different as he once thought. In fact, they have experienced a lot of the same triumphs and discouragement in their lives. And when we look back at where we were separately, and where we want to go together, it’s clear.

We are simply, better together.

The first of many shared innovations is now LIVE on ACG’s business platform. LA technology has been embedded into ACG with the launching of Cloud Playground. We can’t wait to see what we’ll accomplish in the future, bringing together the very strengths that used to separate us.a cloud guru acquires linux academy,linux academy logo